COVID-19 Update: We’re Fully Operational & Available to Help!
We are grateful to our amazing team of dedicated professionals who are helping us support our clients with 100% operational capacity
Home » Blog » Google Maps + Pac-Man = Endless Entertainment 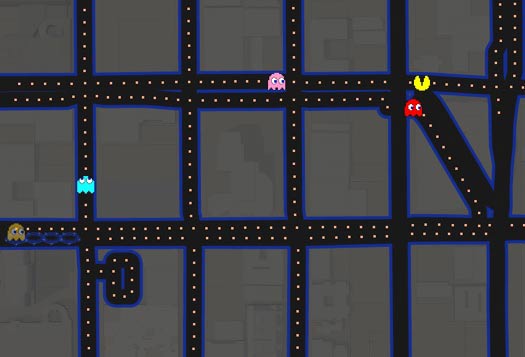 Have you recently searched for a home or business using Google Maps? If so, you may have noticed a new icon in the bottom left hand corner of the map, next to the Street View option. If you think this icon looks familiar, you’re right! It’s an image of the classic video game, Pac-Man.

As an April Fool’s “joke”, Google is turning your favorite city streets into a live Pac-Man game, which has already gotten a lot of attention on the web. Wired.com has even released the top 15 spots to play Pac-Man in Google Maps – with number one being Lombard Street in San Francisco.

While not every street can be turned into the Pac-Man game (mostly due to lack of cross streets in more rural areas), users have been able to collect cherries and escape chasing ghosts around some pretty iconic landmarks like the Taj Mahal and the Champs-Elysees.

The game is not available on mobile devices, only desktops, which is interesting since Google just released information regarding an upcoming update about mobile-friendly websites. Just kidding, we know Pac-Man for Google Maps is all in good fun!

Of course, Pac-Man won’t have any impact on your local SEO, and more importantly, it won’t last long. Be sure to play a game in your favorite city before it’s too late!